A Panama City, Florida dolphin tour operator was recently fined for harassment under the US Marine Mammal Protection Act (MMPA). On July 8, 2014, an Environmental Protection Agency (EPA) Administrative Law Judge upheld a fine issued by NOAA’s Office of General Counsel that assessed a civil penalty of $4,500 on Blue Dolphin Tours and its boat captain for their role in feeding wild dolphins. 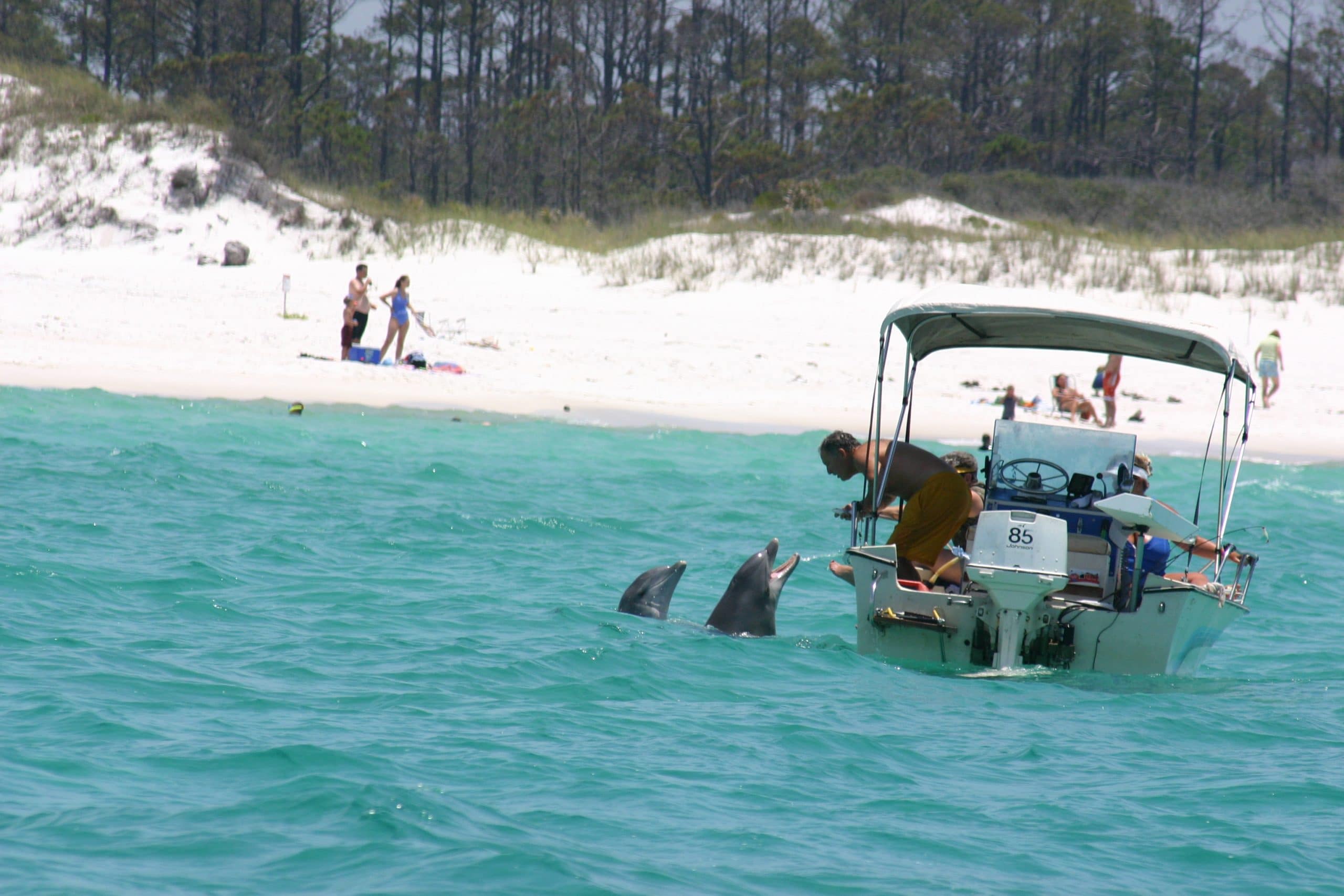 It is illegal to feed or attempt to feed (provision) wild dolphins under the MMPA as such activities can alter their behavior and put them at risk for significant harm and even death. Violators of the Act face civil penalties of up to $11,000 and criminal penalties up to $100,000 and one year in jail if found to have illegally interacted with a wild dolphin. NOAA has brought cases against other vessel and tour operators and their staff for feeding and harassing dolphins in the Gulf region over the past two years, and WDC has also stepped in to support these enforcement efforts.

This illegal incident occurred off of Panama City’s Shell Island, an area that has long been identified as a breeding ground for interactions between dolphins and humans. In fact, a systematic study published in 2004 seeking to quantify the effects of human interactions on the behavior of bottlenose dolphins in the waters near Panama City Beach, Florida found that human-dolphin interactions, including feeding and swimming, were rampant and posed significant risk for both humans and dolphins and that immediate enforcement action was necessary. This study was conducted under the request of the US Marine Mammal Commission because of the high incidences of egregious swim-with and feeding activities occurring in this region. Since this study was released over 10 years ago, NOAA Fisheries has continued its outreach and enforcement focus in Panama City with a goal of raising awareness and enforcing the MMPA for ongoing violations.

Swimming with dolphins in the wild can also constitute harassment, which is technically defined by the Act as any act of pursuit, torment, or annoyance which has the potential to injure or disturb a marine mammal, including the disruption of behavioral patterns such as migration, breathing, nursing, feeding, or resting.

Indeed, the provisioning and harassment of wild dolphins has been a concern and problem for decades. In fact, interactions with wild dolphins have become so prevalent, and the consequences so serious, that NOAA Fisheries launched a public campaign in the late 1990s to deter feeding, touching and swimming with dolphins in the wild. This ‘Protect Dolphins Campaign’ deals directly with human-dolphin interactions and harassment in the wild, and seeks to educate the public about the risks to dolphins and the public in interacting with dolphins, pointing to the grave consequences that can result. Provisioning dolphins modifies their natural behaviors and leaves them at increased risk for collision with boat propellers, vandals, recreational and commercial fishing operations, and may prevent them from foraging on their own.

Consistent with the MMPA, NOAA Fisheries’ official policy on human interactions with marine mammals states that the agency cannot support, condone, approve or authorize activities that involve closely approaching, interacting or attempting to interact with whales or dolphins in the wild, This includes attempting to swim with, pet, touch or elicit a reaction from the animals because of the potential for these activities to harass the animals. 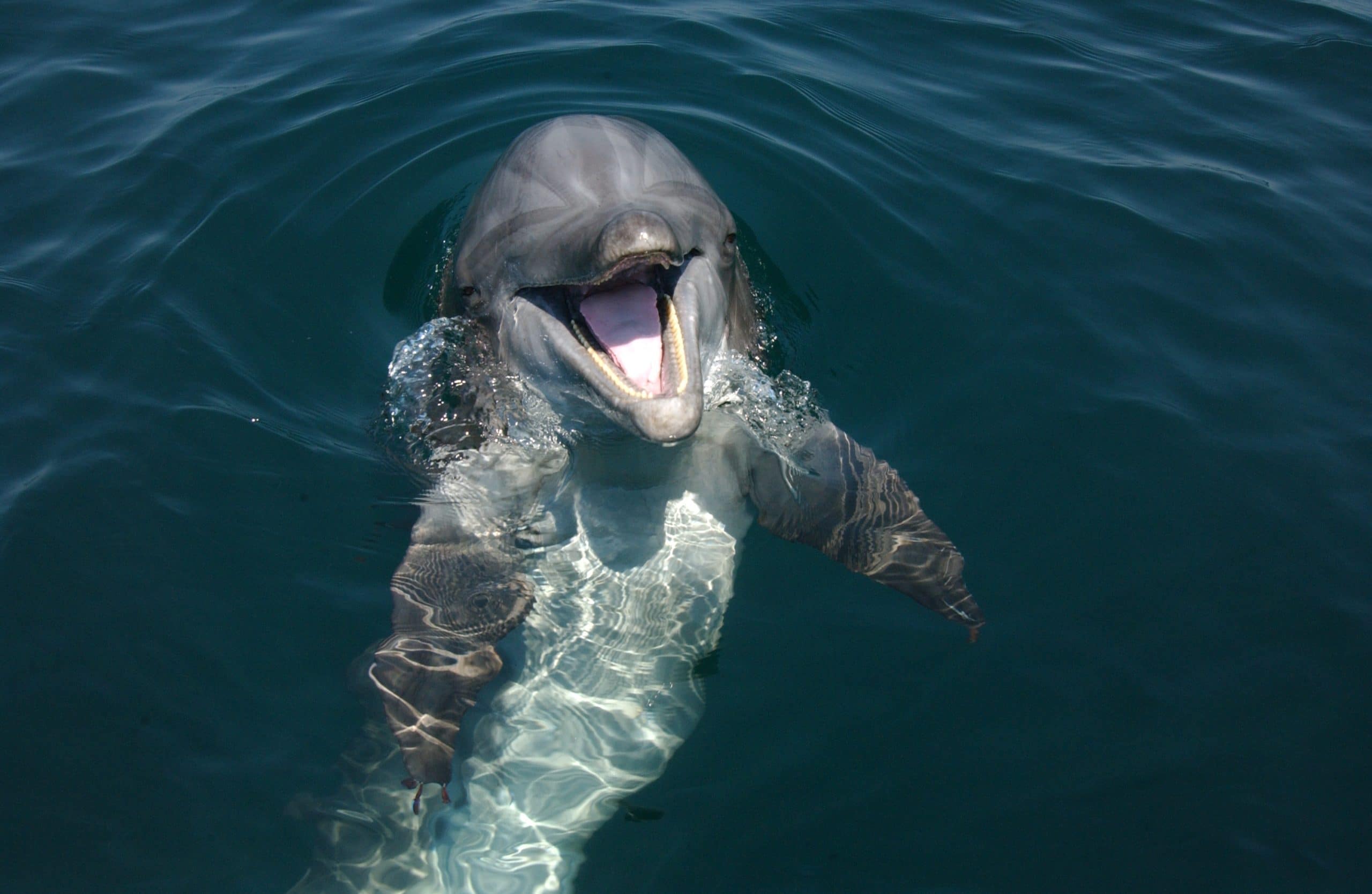 WDC maintains a similar policy on interactions with whales and dolphins in the wild: we are unable to recommend public support for commercial swim-with programs because it is very difficult to ensure that the encounter takes place on the whale or dolphins’ terms and is not an intrusive or stressful experience for the dolphins, and a safe one for the human participants.

Sadly, wild whales or dolphins are often harassed and repeatedly disturbed by swim operators who tend to drop swimmers in the water as close as possible to the animals. Research indicates that, in some areas heavily targeted by commercial swim tours and other human activities, dolphins are actually leaving their traditional habitat in favor of quieter areas. There is concern that disruption to feeding, resting, nursing and other behaviors may have a long term impact on the health and wellbeing of individuals and populations. For instance, the disruption of resting and other behaviors by swimmers in the Hawaii Islands is of increasing concern where recent field research has revealed that local spinner dolphin populations are being impacted by these swim-with activities.

Another concern is the safety of both swimmers and dolphins. Whales and dolphins are large, powerful animals and if not treated with respect, are capable of injuring people in the water, either accidentally, or if they feel threatened in any way. Like all animals, whales and dolphins are also protective of their young. NOAA has documented cases where swimmers in Panama City have had dangerous in-water encounters with dolphins behaving aggressively (ramming, pulling underwater, mouthing) to them because the dolphins were being harassed by people trying to touch/pet, feed, or swim with them.

Finally, human-provisioned dolphins are also more susceptible to targeted vandalism. Between 2002 and 2012, NOAA has documented a total of 12 cases of dead dolphins with evidence of gunshot wounds, revealing the growing threat of dolphins being targeted. Dolphins often depredate commercial and recreational fishing lines, and may become a target, especially in times of economic hardship. Or it might be that dolphins are the cruel and intentional victims of random vandalism by thoughtless individuals. In an extreme case of cruelty, one dolphin was found dead with a screwdriver lodged in its head near the Florida-Alabama border in June 2012.

This culture of dolphin exploitation is pervasive along the panhandle region of Florida, where sun seekers and vacationers are lured to the warm waters of the Gulf, and the readily-available array of entertainment options, many of which advertise and offer the potential to interact with wild dolphins.

However, while there appears to be a wild free-for-all in Panama City, Florida, other locations along Florida’s coastline represent the best in responsible dolphin watching, and host a number of tour operators that adhere to the Dolphin SMART program.

In an attempt to reduce the public’s expectations for close interactions with wild dolphins, NOAA Fisheries, along with WDC and other partners, developed and launched the Dolphin SMART program in 2007. Participant tour operators agree to not engage in swim-with, feeding or other detrimental behaviors, along with adhering to additional criteria for responsible viewing of wild dolphins.

WDC encourages visitors to Florida to bypass the ‘hotbed of harassment’ in Panama City, and seek kinder and gentler beaches along southwest Florida’s coastline where dolphin-friendly and responsible tour operators place the health and welfare of wild dolphin populations, along with the safety of their patrons, first. Participating Dolphin SMART operators can be found here.