Sometimes, it’s nice to be able to enjoy the little things.  Earlier this year, San Juan County announced a “determination of nonsignificance” (DNS) for a proposal to build a dock on the west side of San Juan Island – an important foraging area for the critically endangered Southern Resident orcas.  Under the State Environmental Policy Act, projects that require government action have to undergo an environmental review to determine potential consequences.  A DNS means that a government official determined a project is not likely to have significantly adverse environmental effects.

After receiving over 100 comments from various individuals and organizations, including WDC, San Juan County withdrew its initial determination and ordered changes made to the location of the proposed dock, which also requires a new environmental review, determination, and commenting process.  With the recent news of two more members lost from the Southern Resident community, these whales need all the help they can get.

The 271-foot dock would have been a community dock for up to 6 boats on the west side of San Juan Island.  This area is part of a voluntary no-boat zone for the Southern Resident orcas, intended to give them some space free from vessel noise and harassment.  Haro Strait, between the west side of San Juan Island and Vancouver Island, is an important foraging and travelling area for the Southern Residents.  Haro Strait and Johnstone Strait (further to the north and part of the Northern Residents’ critical habitat) have unique topographical characteristics that create narrow channels with strong currents.  This funnels migrating salmon and concentrates them to create a salmon buffet for the orcas. 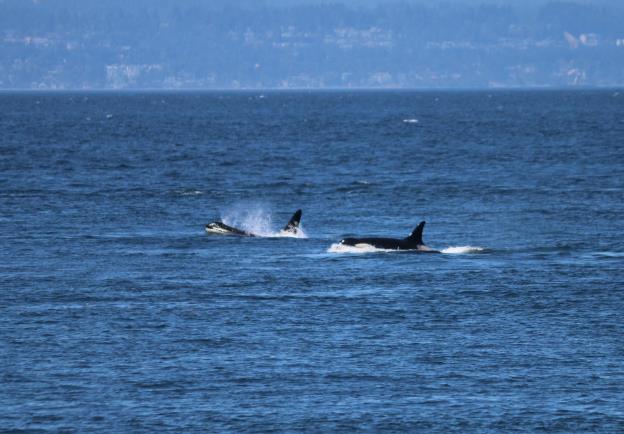 The no-boat zone extends a quarter-mile from the main shoreline on the west coast of San Juan Island and includes a half-mile zone around Lime Kiln State Park – a designated Whale Watch Park.  It is currently voluntary and only in effect when whales are present, though the National Marine Fisheries Service (NMFS) considered designating the area an official no-boat zone in its update of vessel regulations for Washington state in 2011.  Although the proposed protected area was not included in the final regulation update, there is still significant interest in developing a Whale Protection Area – a Marine Protected Area specifically based on whale presence and habitat use – on the west side of San Juan Island and making it officially boat-free. 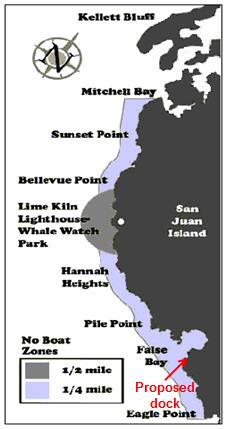 Something as simple as the construction of a new dock may seem harmless, but its location in the middle of an important foraging zone and potential protected area would cause significant impacts to the endangered Southern Residents.  Not only would the noise and activity from the construction itself disrupt foraging and impair communication for the whales, but the addition of private vessels – the top violators of whale watch regulations – to the area would be completely at odds to the no-boat zone guidelines and would only add to the problem of increasing noise in the Salish Sea.

The many comments submitted to San Juan County directly resulted in the withdrawal of the DNS and the requirement to reconsider the location of the dock.  It’s a little victory that will significantly benefit the Southern Residents – just an example of how your support of our efforts can have a very real outcome!