I spoke last night to Los Angeles-based writer, director and film maker, Jonathan (Jonny) Zwick.  Jonny spent three months in Iceland last summer shooting footage for Breach, an independent documentary film that focuses on the cultural, scientific and economic ‘justifications’ which underpin the Icelandic whaling industry – and systematically deconstructs them. His film juxtaposes images of the starkly beautiful Icelandic landscape and rich natural history, with jarring images of the slaughter of fin and minke whales.  He allows a whole range of people – from whalers to whale watchers; government scientists to conservationists, as well as ordinary Icelandic citizens – to voice their opinions via voiceovers and ‘talking head’ interviews and in so doing, allows both sides to expose the blinding contradictions inherent in Icelandic whaling.  As he puts it:  “My film focuses on the spectacular ironies, contradictions and unethical decisions surrounding the attempts made by the whaling industry and the Icelandic government to convince people that there is still a market for this meat.” 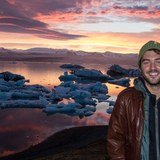 Back home in the US, Jonny has created a Kickstarter to find the funds required now to cover translation, editing and distribution costs. You can see a trailer of the documentary and find out more about the vision that drove this film to be made.

This ‘crowd funding’ initiative ends on February 20th.  If Jonny reaches his target, he can complete his film and take it to Iceland, where he wants to show it to as many people as possible – particularly youth audiences.

I’ll leave the last word to Jonny, but I hope that he will find the funds to complete his project: this is a film that absolutely needed to be made, and now, more than ever, absolutely needs to be ‘out there’.

“I put myself in uncomfortable and sometimes dangerous situations while covering this story. I went on a minke-whale hunt, interviewed whalers in their own home, followed truck drivers transporting whale meat to isolated locations in the middle of the night, and was chased out of the Hvalur whale processing plant by rampant whale flensers.