Further to our recent blog on the discovery of minke whale meat openly on sale at Berlin’s Green Week and the subsequent Norwegian claims that they were unaware of the illegality of such sales, it is quite interesting to have a look at earlier Norwegian press on the subject. 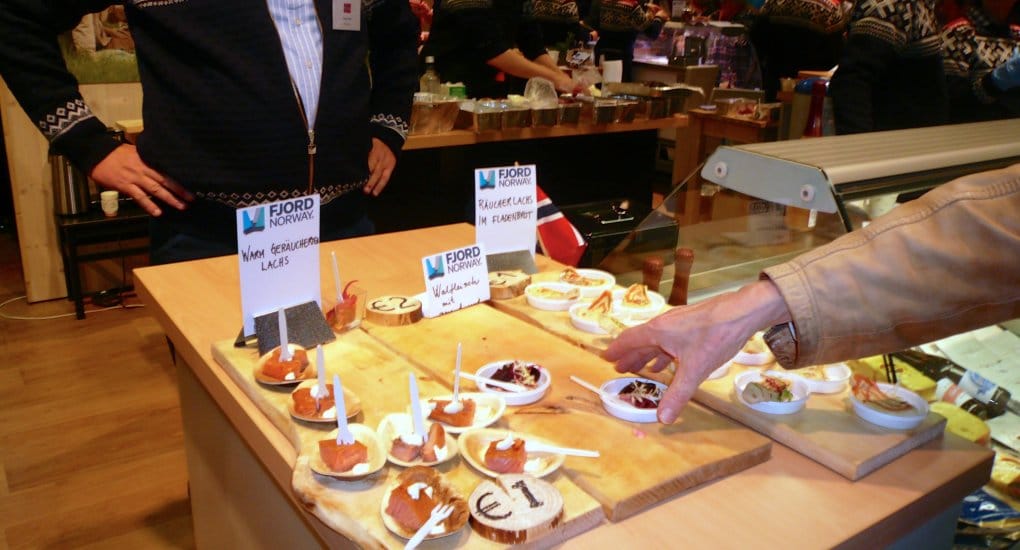 On Tuesday 21st January, a day before WDC and Berliner Zeitung brought the sale to the attention to the German public and authorities, the Norwegian press ran an article with the headline ‘Whale meat crisis avoided’. The article refers to the German Minister of Agriculture, Hans-Peter Friedrich, who visited the Norway stand during a walkabout. According to the article, Mr. Friedrich was about to be served a selection of Norwegian specialities, including smoked minke whale meat, when a quick-thinking member of the Norwegian delegation intervened at the last moment to prevent the  waiter from feeding the minister the whale meat. The article commented cynically that ‘the German press would probably have been relentless if the German minister had eaten whale meat.’ A follow-up article on Thursday 23rd confirmed that Norwegian company, Myklebust Whale Products AS, was responsible for delivering the whale meat to the Norwegian stand at Green Week. (Myklebust, incidentally, is currently seeking to export around 34,000 kilos of minke whale products to Japan, following a similar export last spring of 4,250 kilos.)

Myklebust Whale Products CEO, Ole Mindor Myklebust, was also present during the fair. Given his extensive experience of trading whale products as well as involvement in developing new marketing strategies for whale meat, it is impossible that Mr. Myklebust was unaware of the legal situation surrounding this bloody trade. However, in an interview in Norwegian newspaper Sunnmørsposten   he was quick to claim ignorance of any wrongdoing and laid any blame squarely at the feet of both the German customs and the fair management.

“We supplied the meat to a Norwegian registered company.  The product was legally caught, and here we are talking about showing off a Norwegian industry at a booth.  It is the German customs authorities that have not done their job in the first place: beyond that, I will not comment. Had they arrived four hours later, there would have been nothing to seize.” (This latter comment is maybe a reference to the fact that much of the meat had already been sold to visitors).

Innovation Norway, which is the Norwegian government’s official trade representative abroad and responsible for the stand at the Green Fair, was, initially at least, also keen to play the ‘blame game’ and claim ignorance of any lawbreaking. However, only months ago, in April 2013, this state-owned company offered a three-year grant to Fisheries Park AS specifically to develop a marketing strategy, ‘brand association’ and quality standard for whale products – on behalf of the Norwegian whaling industry.  Small chance, then, that Innovation Norway was unaware of the relevant laws and the company eventually acknowledged this and issued an apology.

Perhaps unsurprisingly, those involved have conveniently failed to mention the fact that Norwegian law itself was broken in the first instance and the whale meat should never have left Norway if the relevant laws relating to the export of whale products had been adhered to.  The regulations require government registration and an export permit for any proposed export of whale meat from Norway; subject to the provisions of CITES Appendix 1.