Only a matter of days after we exposed the sale of beer containing dead whale in Iceland, WDC has today revealed that food products claiming to contain Norwegian minke whale meat, are being sold illegally at one of the world’s biggest food and agricultural fairs – Berlin Green Week.

Following a tip off, WDC, together with marine protection organization MEER eV, discovered that the dish, which purportedly contains smoked whale meat with blueberry jam (pictured centre), was being offered to the public at the fair which celebrates food and tourism from around the world. 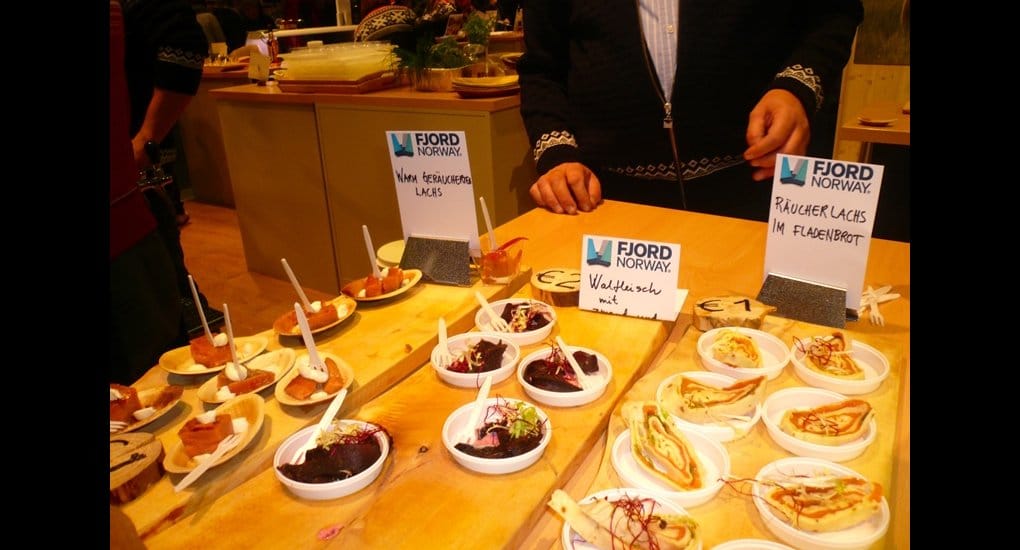 WDC has brought the sale of the meat to the attention of the German Federal Environment Ministry who have confirmed that they will be investigating further.  Import and sales of whale and dolphin meat to Germany and elsewhere in the EU are strictly prohibited.

“The fact that the meat of a species which is strictly protected in Germany, and the EU, is offered for sale is scandalous” , says Astrid Fuchs , campaign manager at WDC.

“This underlines the fact that there is an urgent need for a greater application of existing laws. Not only has Norway broken the law here several times – by importation and sale – but the unsuspecting visitors to the fair will also be breaking existing laws by purchasing the meat.  It is incredible that this is going on under the noses of the authorities at such a big, international exhibition.”

The discovery is yet more proof of the whaler’s desperate moves to find new markets for whale meat to prop up their failing cruel industry.

Earlier in January, WDC exposed the sale of ‘Whale beer’ in Iceland, the brainchild of the Icelandic Steðjar brewery and fin whaling company, Hvalur.  Health authorities in Iceland banned the beer in a matter of hours after the brewery stated that it contained whale meal purchased from the whaling company.

You can watch footage here showing sales staff at the fair stating: