On January 17th, over 250 bottlenose dolphins were driven into the killing Cove in Taiji, Japan. The drive hunts have been occurring as they do every season, plodding along with ruthless consistency as the hunt season passes well beyond its mid-way mark. Having started September 1st with a possible quota of over 2,000 individual dolphins, fishermen have thus far killed over 500 dolphins of mixed species, and taken 97 into captivity. In this most recent drive hunt, over 25 dolphins may have been taken into captivity. It is not clear whether additional dolphins will be killed, taken into captivity, or released. 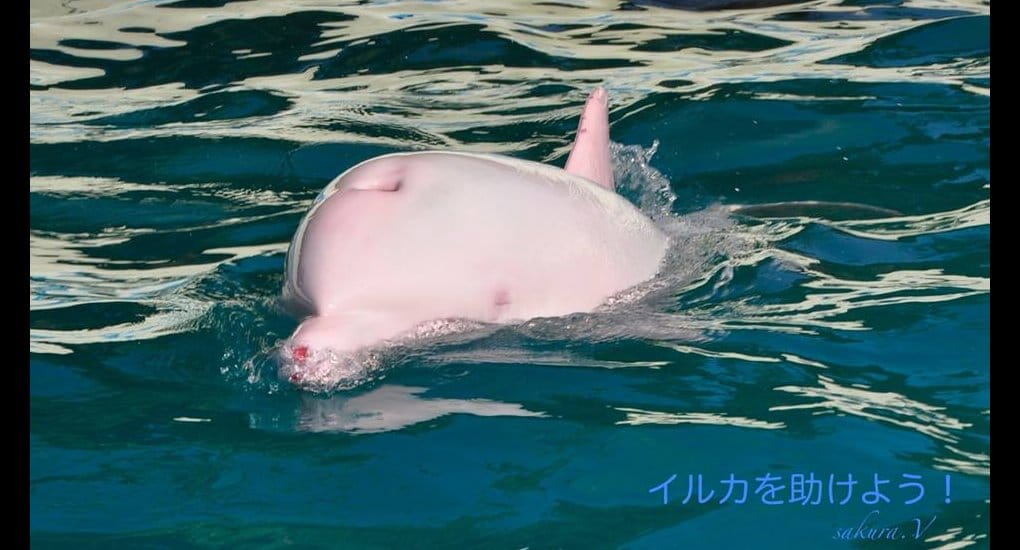 Although the presence of a striking rare albino dolphin included in the midst of such a large number of bottlenose dolphins corralled into the killing cove raised more international attention than usual, including tweets from the new U.S. Ambassador to Japan, Caroline Kennedy, expressing concerns about the humaneness of the hunts, this was business as usual in Taiji.

The poor young white dolphin was hauled away to the Taiji Whale Museum where she will eventually be displayed to the public if she survives. An equally large round-up of bottlenose dolphins occurred in December of 2012, as well, with similarly devastating results where 25 were killed and over 100 individuals were taken into captivity.

Dolphins have been rounded up, hauled away into captivity, and killed throughout the season in Taiji. This event, punctuated by a rare and innocent white light whose mere color stands in stark contrast to the bloody horror surrounding her acquisition, drives home the message even more.

Yes, an albino dolphin is extremely special. But so is every other individual dolphin who is driven for miles, traumatized through violent separation from her family members, and who witnesses the slaughter of her podmates.

It is the demand from captive facilities that is driving these hunts. We revealed this connection in our campaign report, Driven by Demand many years ago and highlighted by the documentary, The Cove. But as the numbers taken into captivity continue to increase, this undeniable connection to the public display industry can no longer be stomached by the public.

Zoo and aquaria associations, and even the marine mammal trainer community, issued statements nearly a decade ago condemning the hunts, but we have heard little from them since. These statements are hardly enough. The resounding silence from the public display community that surrounds these hunts every season is deafening.

SeaWorld remains silent in condemning the hunts, despite their pioneering the horrible association with the drive hunts in the 1980s and early 90s. Why? Because they want to keep the door open, afraid to condemn any acquisition from the wild for fear their captive breeding populations might atrophy in the future without the possibility of enhancing their gene pool.

Recently, a consortium of Japanese organizations including Elsa Nature Conservancy, Help Animals, and PEACE petitioned the World Association of Zoos and Aquaria (WAZA) demanding real and practical action from WAZA in reprimanding and punishing the Japan Association of Zoos and Aquaria (JAZA) for not abiding by WAZA’s ethical codes, which includes the condemnation of the capturing of dolphins in the drive hunts.

Echoing WDC’s own communications with WAZA, this petition seeks action from WAZA which has failed to act despite its own ethical codes and policies, and has instead retreated behind a ‘dolphin management protocol’ that enables dolphin round-ups to occur specifically for captivity and meant to distance these activities from the killing cove. Unfortunately, this policy has done nothing but validates the captures and continues to endanger dolphin lives around Japan.

Instead of continuing to implicate themselves in this bloody activity, captive facilities could find at least some absolution by openly and actively condemning the hunts, and by refusing to acquire dolphins from the wild in the future. SeaWorld and other captive facilities continue to miss every opportunity to atone for their sins and replace their current hypocritical position of perpetuating this deadly demand that is driving these unspeakable hunts with a real commitment to the protection of dolphins in the wild.

And what can you do? Contact the Prime Minister of Japan, contact your local Japanese Embassy, and never give up in our fight to see an end to these cruel hunts.

We are looking for champions within the public display community to stand up for dolphins, commit to phasing out their captive programs through the institution of birth control and retirement of individuals into sea pen or other sanctuary facilities, and oppose all captures from the wild. Where are you?   It is time for accountability and action from the very community that is undeniably responsible for this travesty that unfolds every September through April in Taiji. The world is waiting, and enough is enough.