In January 2013, the Sundance Film Festival in the US was buzzing with news of a documentary that was listed which would  lift the lid on the dark underbelly of a company that is considered as American as apple pie – SeaWorld.

In just 12 months, Blackfish has brought the barbaric issue of keeping highly mobile, sentient orcas in concrete tanks to the mainstream.

Today, even though Blackfish made the long list, it just fell short of an Oscar nomination. But make no mistake this trailblazing documentary is a true winner in the campaign for animal rights and welfare. 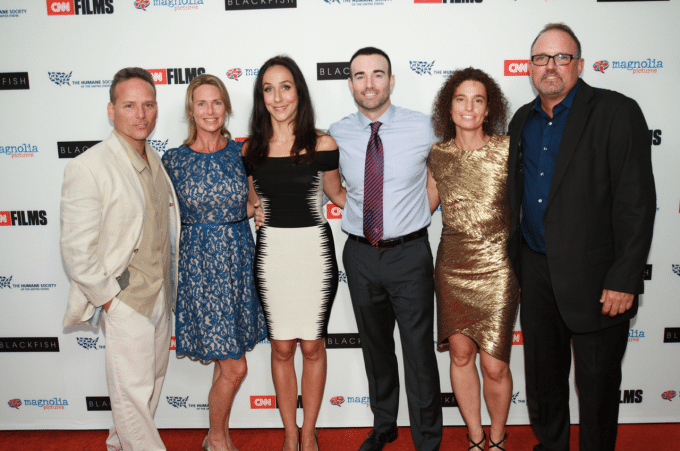 Throughout 2013 the movement that became known as the ‘Blackfish effect’ quickly spread…and SeaWorld became increasingly rattled as media and high profile celebrities lined up to take the corporation to task for the welfare concerns surrounding the care and safety of both humans and whales.

Wave after wave of negative publicity washed over SeaWorld while the corporation, for the most part, stayed silent.

International superstars such as Willie Nelson, Heart and Barenaked Ladies led a mass exodus of bands that cancelled their upcoming SeaWorld gigs.

When Blackfish was aired on CNN its viewing figures broke all predictions and social media activity made it the top CNN movie of the year.

The financial media carried reports of shares in SeaWorld dipping, staff being laid off and attendance down. Even the Chairman of SeaWorld Entertainments Inc. sold off $1.3 million of his company shares.

Today we see an industry at tipping point. If it wasn’t for Blackfish and David Kirby’s insightful book, Death at SeaWorld, would people still be talking about the tragic deaths of orca trainers Dawn Brancheau, Alexis Martinez and Keltie Byrne? It’s a moot point but as award season gets underway I honestly believe that history will show that these two ground-breaking works were the catalyst that made SeaWorld acknowledge that the public appetite for seeing these incredible creatures confined to tanks for our entertainment was waning.  SeaWorld must appreciate that the world has moved on and they must move with it. The public are more discerning and questioning of this ‘national institution’ as its dark practices are scrutinised like never before.

For SeaWorld the 40 year experiment on keeping whales and dolphins for our amusement must surely be coming to an end. Like the rock music that plays on a loop at the Shamu Stadium, the noise surrounding this controversy is deafening and can no longer be ignored.

It is now time for SeaWorld to listen to the public, change its business model and, if it is really serious about its often quoted commitment to conservation and education, it should pledge to end cetacean captivity.

The BAFTAs will be announced on February 16th.