A highlight of this week’s Biennial Conference on the Biology of Marine Mammals, in Dunedin, New Zealand, was the panel discussion on killer whales in captivity. This was a unique event for the Society. In the wake of the film “Blackfish”, the book Death at Sea World, and the recent live captures of 7 killer whales in Russia, the events of the day seemed to be calling out for a response. The turnout filled the largest university lecture hall including many if not most of the 1200 scientists attending the conference. The buzz was palpable. Five questions—among 29 submitted to the Society through a special online procedure—were chosen by a special society committee. Behind these questions was a deeper question: Should the Society be making pronouncements and giving science and conservation advice on such matters? 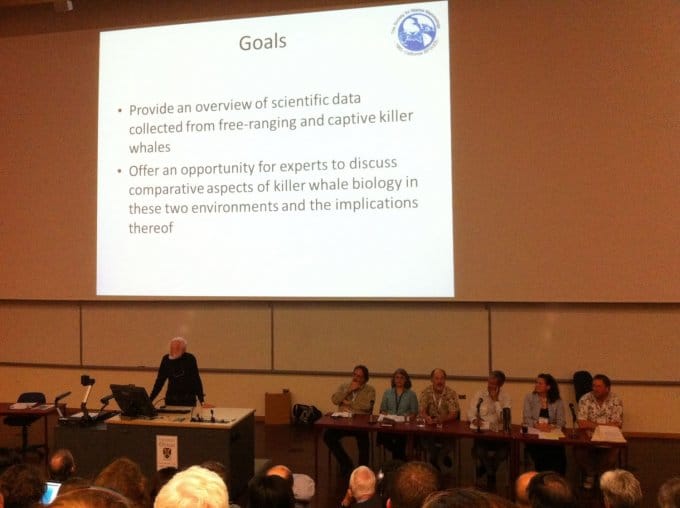 The first question—“What are the benefits and contributions of the research on captive killer whales to conservation of killer whales in the wild?”—from Philippa Brakes produced a wide range of comments. Prof. Mark Orams, Auckland University of Technology, pointed out that there is no evidence in the literature of any long lasting educational benefit from seeing killer whales in captivity. University of Victoria Prof. Dave Duffus stepped outside the question to address the pressing needs of scientific work in the wild and the important questions of our day. What does it mean for ocean ecosystems as we lose these big predators in the ocean?

Sea World veterinarian Dr. Judy St. Leger (full title: Corporate Veterinarian for Pathology and Research for SeaWorld Parks & Entertainment) talked about nailing down the gestation period in killer whales among other things. Dr. Naomi Rose, from the Animal Welfare Institute, agreed that these were advances but was frankly astonished that so little had been done in terms of captivity studies in the past 50 years since killer whales were first captured, during a time when orca research in the wild had proceeded to rewrite our understanding of every aspect of killer whale behavioural ecology, acoustics, abundance and distribution.

Answering other questions, Dr. St. Leger’s comments about the killer whales “in care” at Sea World painted an inadvertent picture to some members of the audience of ailing or aging orcas unable to fend for themselves being taken care of in their dotage. Never mind that Sea World or other capture enterprises had taken these animals from their family and forced them into care.

My question, based on the news pouring out the #Russianorca facebook pages came up fourth: “Regarding the recent captures of 7 killer whales in the Okhotsk Sea, should the Society for Marine Mammalogy provide its expertise to the Fisheries in Russia on the size of the quota for 2014 and future years, and comment on the failure to evaluate separately the management status of the two known ecotypes of Russian Far East killer whales; should the population, breeding unit size, and other factors of the 2 ecotypes be considered before undertaking captures?”

Naomi Rose was asked by the moderator to answer first because she had recently visited Russia. She spoke about the lack of data on Okhotsk Sea killer whales and the alarming spectre of a new killer whale capture industry that seemed to come out of nowhere and be out of hand from the start. She felt that it should be the duty of the Society to give Russian Fisheries the benefit of its expertise.

Next Dr. Doug DeMaster, who directs NOAA’s Alaska Fisheries Science Centre, offered the view that Society biologists have the tools for evaluating killer whale populations and determining take for management. The moderator asked for any other comments and Sea World’s St. Leger agreed that any quotas should be on a sustainable basis.

To some, these statements seemed tame and tepid. To others, it was pushing the boundaries of how far scientists should go. I joined the Society for Marine Mammalogy as a charter member and it is worth remembering the degree to which the Society was founded partly out of the aquarium industry and US Navy cetacean research that was prominent in earlier decades. Many, however, feel that the Society is now at a turning point and needs to rededicate its mission. There was spontaneous loud applause at many points in the evening, mainly for the outspoken comments by Naomi Rose. But all participants received applause on certain points. The event was recorded and a transcript is to be made available on the Society website.

At the Society’s membership meeting, it stopped short of deciding to send a letter to Russia—it may well be useful for the International Whaling Commission to give input into the Russian capture quotas and various Society members can take the lead on this. Still, further action by the Society remains on the table. Many agreed that it was time for the Society to start discussing these matters not just inside the meetings but between meetings. The discussion, at least, has begun.