In the North American office of WDC, we have spent the last year focused on The Act Right Now campaign, the goal of which was to ensure federal protections for the critically endangered North Atlantic right whale.  Specifically, the Federal Ship Strike Rule (which was established in 2008 and requires large ships to slow down in the known habitats of right whales), which was set to expire this coming Monday (December 9th ).  Research showed that in the 5 years since it was enacted, this rule was key in reducing the number of right whales killed from vessel strikes by up to 90%.  For a species on the brink of extinction, this rule was a glimmer of hope; an opportunity for the population to grow and survive for future generations.  We couldn’t let that rule expire and risk losing the right whale forever. At least, not without a fight. 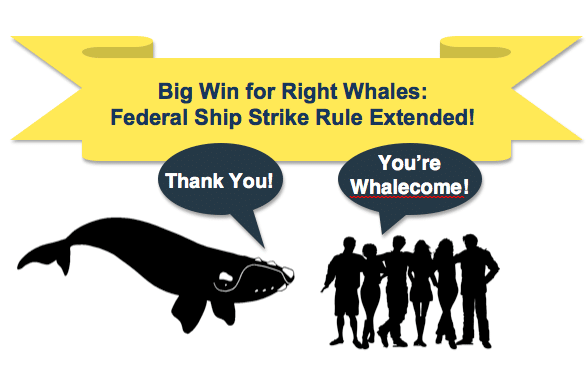 So we called on all of our supporters, our cities and towns, friends and partnering organizations to help join this fight. Through Act Right Now, WDC submitted more than half of the 145,000 comments received, asking the National Marine Fisheries Service to extend this rule indefinitely.

Today we are elated to announce that all our this work has paid off! The Ship Strike Rule has been extended- and this time, there is no further sunset clause.  Right whales can look forward to the protection of this regulation until their numbers are plentiful and their species no longer require such protections.

We are thrilled that policy makers have come to defense of the North Atlantic right whale and have acted to protect this critically endangered species.  The extension of the Ship Strike Rule speaks to our nation’s priorities and values and I am prouder today to be an American citizen.

Thanks to all of the people who joined the campaign – either through a signature, a donation, a comment submitted to NOAA or just talking about this issue with friends and family- today we can celebrate the survival of the North Atlantic right whale!