What a strange year for sightings! This whale watching season was odd in that we didn’t see as many whales and as frequently as we have in previous years. The population of humpback whales that we research makes a yearly migration to feed in the nutrient-rich and highly productive waters of the 842-square mile Stellwagen Bank National Marine Sanctuary. There exists a long history of an abundance of some of a humpback’s favorite foods found in the sanctuary; however, many believe that there were higher concentrations of food elsewhere this year, driving the whales out of the sanctuary. Despite the valiant efforts of all the captains, crew, and interns throughout the whale watching season, we had fewer sightings overall, including fewer sightings of our adoptable whales.

Out of our nine, beloved adoptable humpbacks, we first saw Reflection and Salt splashing around on June 9th on the same trip. Later in the season came Midnight, Mars, Coral, Colt, and then Sirius finally made an appearance at the end of August.  That leaves two of our whales that we didn’t see the whole season! Although we were unable to spot Pepper, our friends at the Granite State Whale Watching Company from Rye, New Hampshire were lucky enough to get a couple of looks at Pepper at the beginning of September and shared their sightings with us!   As you can see, Pepper was found farther north of Stellwagen Bank in an area known as Jeffrey’s Ledge, where our interns were not able to explore. Although we did not have many sightings of our individual adoptable whales, some of their calves and siblings were found all throughout the season. Unfortunately, we weren’t as lucky with Crystal, and his whereabouts are still a mystery to us. For example, Crystal is one of Salt’s oldest calves, born in 1980, and his younger siblings Thalassa and Sanchal were spotted this season. Mars is a mother to ten known calves (there may be more!), and her calf Nile was quite the celebrity this season. Nile is a twenty-six year old female and was spotted over 170 times this season! Mars is also one of our favorite grandmothers, and a couple of her grand-calves were spotted this season as well.

The Google map below allows you to explore our sightings of our adoptable whales. Each star represents a unique sighting or data point in our extensive database. The pink, oddly-shaped outline represents an approximate border of Stellwagen Bank National Marine Sanctuary. When you click on a star, you’ll learn exactly where and when one of our whales was spotted, if there were any other whales around them, if they were exhibiting any fun behaviors, and you’ll even see a picture of our whales! At the bottom of the pop-up information box, there is a link that will lead you to the full-size image found on our Flickr page. The links for the Pepper sightings will direct you to the naturalist’s blog from Granite State Whale Watch. Hope you enjoy! Click here or on the map below for an interactive version of the Google map. 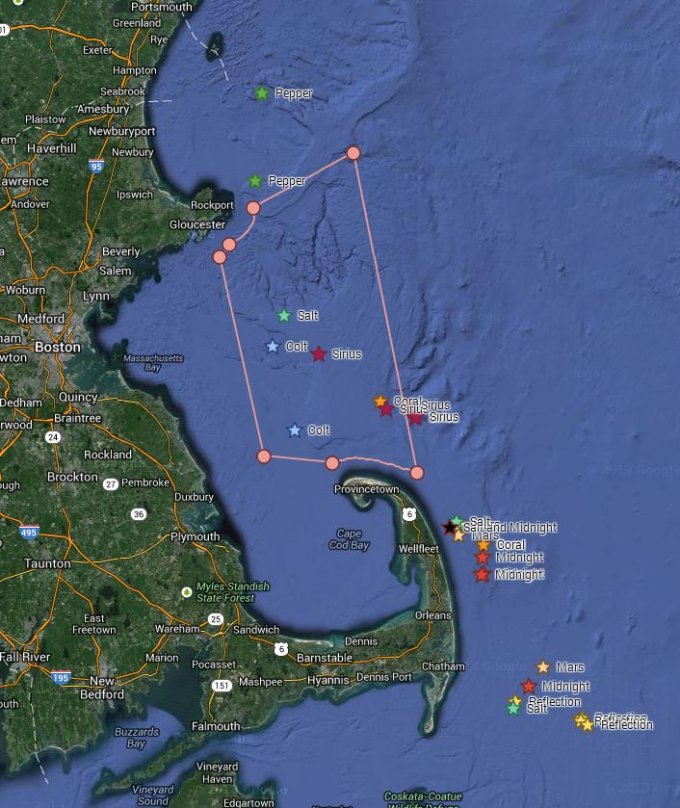 Thank you to all the proud adopters who donate to support their whale and our work to protect all whales and dolphins!

To learn more about our adoptable whale program visit: http://adoptawhalena.wdcs.org/