Before my eyes, and even before Blackfish actually aired on CNN in the United States and across its cable and satellite networks on Thursday evening, the numbers kept lurching forward as members of the public weighed in. Along with Twitter and Facebook feeds, two separate polls were launched by CNN to gauge public reaction to the various programming surrounding the airing of Gabriela Cowperthwaite’s documentary Blackfish. If there was ever a doubt about how the public feels about orcas in captivity, it has been cast aside in an amazing culmination of reaction to the debates and news pieces that filled CNN’s programming the entire week before the film’s airing on October 24th.

These two polls asked two basic questions: Should killer whales be held in captivity? And, would you take your kids to SeaWorld? The CNN-hosted polls that attempted to collect the public’s sentiment during the various panels and debates surrounding the airing of Blackfish tell us the real story. At last view, of 5,693 individuals that weighed in, 86% indicated that they WOULD NOT take their family to SeaWorld, and 90% of the American public believes killer whales SHOULD NOT be held in captivity. 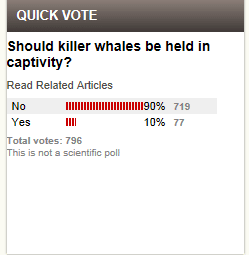 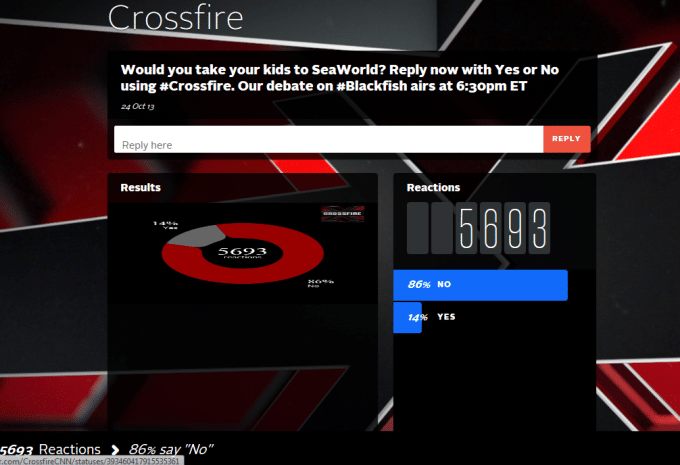 These results not only support, but intensify the results of an ORC poll conducted by WDC in June 2012 that revealed that 26% of the American public supported orcas being in captivity, while 34% were undecided or conflicted. Furthermore, these CNN polls question the statements made by Sea World claiming that over 90% of the American public believes that captive facilities are the best way to inspire and educate the public.

Most official polls, including WDC’s, employ a random sampling of approximately 1,000 individuals.  The CNN polls are potentially much more representative and reflective of true American sentiment, where CNN is available in over 100 million US households and 890,000 hotel rooms.  With carriage on cable and satellite in Canada, alongside potential CNN International viewership in over 212 countries and territories, the potential reach is profound.  As of August 2013, cable network coverage estimates indicate that 98,946,000 American households receive CNN.

It appears that the public has found some direction as the real story behind captivity spreads through the airwaves, no longer controlled by an industry-led narrative manufactured by SeaWorld and other captive facilities. The public is gaining clarity, and with awareness, support for captivity is waning.

Those who voiced opposition to the captivity of whales and dolphins in the past have certainly been perceived as a fringe element of society, mischaracterized as a small segment of activists more concerned with the welfare of a relatively few number of animals than the thousands of whales and dolphins that succumb to fishing nets, marine debris, hunting, and other threats. However, as the world has recently become more aware of the deep interconnectedness between the captivity industry and real conservation issues in the wild, the anti-captivity message is becoming less counter-culture, more mainstream, and more reflective of a changing ethic within a modern society.

Whether it be the slaughter of thousands of dolphins in Taiji, Japan as portrayed in The Cove, or the decimation of beluga populations in far eastern Russia targeted for capture by US and international facilities, or the continuing struggle of resident orca communities to recover from captures that occurred over 50 years ago, we see the scars and everlasting marks of an industry that has perpetuated a great deal of suffering not only for those individuals confined to a concrete tank, but their brethren in the wild. No longer is captivity about the sacrifice and suffering of a few individual whales and dolphins on display, it is about a global reaction to the unnecessary and destructive plundering of sentient beings in the name of education and conservation, correctly offending our sense of right and wrong.