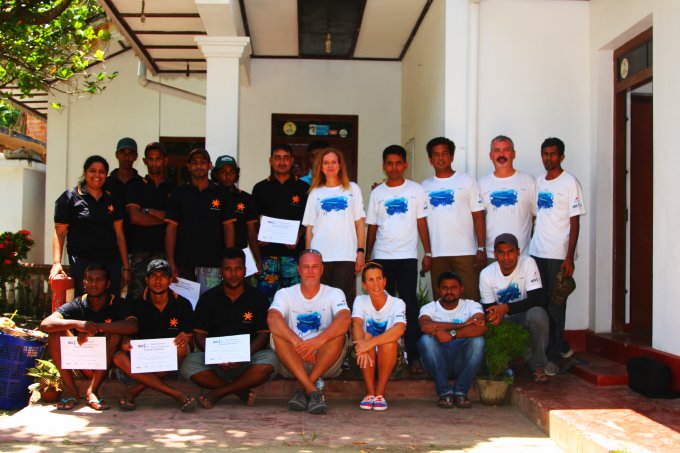 I have just returned from an 8-day trip to Sri Lanka where our small WDC team assisted marine biologist, Anouk Ilangakoon, in running a 2-day training workshop for whale watch operators in Mirissa on the south coast. This small village, with its palm-fringed coastline and harbour filled with a jumble of brightly-coloured fishing boats, has become a magnet in recent years for whale watchers intent on seeing blue whales.

Here, the continental shelf pinches in close to shore at nearby Dondra Head, creating ideal conditions for blue whales, sperm whales and a host of other whale and dolphin species; indeed during peak season (December-April), sighting rates are incredibly high. But success has not come without a price. Here, as many other parts of the world, whale watching has mushroomed and a massive influx of tourists and vessels has threatened to overwhelm the carrying capacity of the area. This has led to increasing concerns that the industry is growing at an unsustainable rate, threatening the safety and welfare of both whales and tourists.

And so Project BLUEprint was born.  Launched at last year’s World Travel Market as a partnership between WDC, SriLankan Airlines and eco-tourism companies, Jetwing Hotels and John Keells Group (who kindly sponsored our visit), the project promotes responsible, community-based whale watching in Sri Lankan waters.  Mirissa, as the most popular destination, was the obvious focus for our first workshop and I’m pleased to report that this was a great success!

Ninety people attended, mainly local whale watch skippers and crew members, who were joined by representatives from the Sri Lankan Navy and Coastguard, the tourism industry, research community and other stakeholders. The workshop was conducted in Sinhala, the local language, and covered all aspects of responsible vessel handling and safety protocols. The sessions were planned to be as interactive as possible and several lively discussions took place!  Afterwards, several operators commented that they were so pleased to have a forum for discussions as only rarely did they all come together.  The following day, around 70 skippers and crew attended a practical boat training session where classroom theory was put into practice.

Feedback from the workshop has been overwhelmingly positive. Naturally, we hope that we have encouraged the local operators to embrace responsible boat handling but, equally importantly, to regard themselves as a community rather than merely individual operators. Only by working together can they hope to develop whale watching in a sustainable manner; recognizing that protecting the whales and dolphins they encounter in their waters also means protecting the livelihood of each and every member of their community.