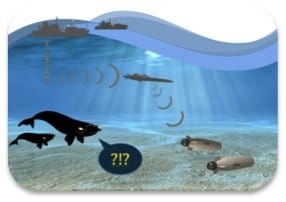 When I heard the news, I couldn’t believe it:  this week, the 11th circuit appeals court approved Naval plans to begin construction on an Undersea Warfare Training Range (USWTR). The USWTR is designed to train personnel in shallow-water anti-submarine warfare and will include underwater fiber optic cables that will cover a 500-square nautical mile area off the Georgia/ Florida coast and 300 nodes to transmit and receive acoustic signals from ships.  It will also mean substantial increases in submarines and surface ships. This spells trouble for one of the most endangered whale species, the North Atlantic right whale.

Through WDC’s work to increase protections for the North Atlantic right whale through our Act Right Now campaign, I have been eating, sleeping and breathing right whales for the last 10 months.  Figuratively, of course.  More literally: I think, speak and write about the critical status of this whale species during most hours of the day. Accordingly, I am so close to the issues that sometimes I know I have a warped ense of “common sense”.  I don’t think this is one of those cases though.  Let’s look at some of the facts.

The waters off the coast of Georgia and Florida are the only known calving grounds for the North Atlantic right whale; females return each fall to the waters off Georgia and Florida to give birth to their calves before again migrating north to the Gulf of Maine in the spring. Mothers communicate vocally with their family and noise pollution poses a big obstacle for whales- imagine trying to call your child’s name above a noisy crowd in order to warn them of dangers.

Due to their critically low numbers (fewer than 500), right whales are protected under the endangered species act and receive special consideration in development plans such as the Naval training grounds.  The Navy chose this site given the Atlantic fleet’s concentration in Florida waters, and the climate, which will allow year-round training. An environmental survey was completed to assess what real impacts the training zone would have on the local ecosystem.

WDC, along with almost a dozen other conservation organizations provided information about the numerous impacts to the North Atlantic right whale, arguing the project would be detrimental to the species.  Unfortunately, the National Marine Fisheries Service’s (NMFS) approved the proposal, stating ”the U.S. Navy plans are likely to adversely affect endangered whales, but [are] not likely to jeopardize the continued existence of those whales.”

While I wish that to be true, the right whale population is in such critical condition that the death of just one female can truly jeopardize the species.  The three biggest threats they face are:

From a national security standpoint, the protection of our domestic waters is undoubtedly important. However, developing the training zone in an area where two of the three major risks for this critically endangered species are drastically increased should be enough of a reason to find a new site.

Construction on the USWTR is scheduled to begin next year. The Navy has agreed to suspend construction during the calving season from November to April, but will proceed with training operations during that time period.

To get involved in the protection of the North Atlantic right whale, visit www.whales.org/actrightnow

Or donate to the cause at www.indiegogo.com/projects/act-right-now-to-save-the-north-atlantic-right-whale