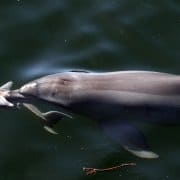 This past week we watched with great sadness the way a mother dolphin grieves for her dead calf. Port River dolphin Wave is known to have given birth to a calf on Sunday, September 22 but the baby was either still born or died almost immediately after being born.

For the next five days Wave refused to leave the dead body of her calf, only giving it up in the end when the body had decomposed almost beyond recognition. When the calf’s body was finally recovered the head and some of its internal organs were missing, possibly the result of a shark attack. What is left of the body will be examined by experts at the South Australian Museum but the cause of death will probably be impossible to determine given the state of decomposition.

Wave was so intent on protecting her dead calf she spent almost no time fishing and we became concerned for her health as photos revealed she was becoming emaciated.

Wave’s previous calf also died soon after being born but she abandoned that one overnight and we never found the body. She had successfully reared three offspring previously (Bronny, Ripple and Tallula) and all have remained in the Port River estuary.

Wave was born around 1992 and is well known for her tail walking performances in Adelaide’s Port River. Tail walking occurs occasionally in the wild but in the Port River it has become part of the dolphin community’s culture. The behaviour was introduced to the Port River by dolphin Billie, who spent a few weeks in the local dolphinarium (closed many years ago thanks to work by a small group of activists, including WDC’s Mike Bossley) and seems to have learned the behaviour from the performing dolphins held there.

Billie was released after a few weeks and swam back to the Port River, where she lived for the rest of her life. For many years she was the only Port River dolphin we observed tail walking but in 2007 Wave also began performing the behaviour regularly. Billie died in 2009 leaving Wave as the only tail walker. In 2010 another adult female called Bianca started tail walking and in 2012 two other adult females (Angel and Juliet) have also been seen tail walking. To our astonishment Wave frequently tail walked last week next to her dead calf, something she had also done with her previous dead calf.

In April, 2010 Wave and her then calf Tallula were observed to have major skin lesions on their flanks, probably the result of sunburn from being stranded on a mud bank. Many cetacean specialists considered these injuries so serious they feared for the dolphins’ survival. Amazingly, both mum and baby survived this trauma.

Wave’s grieving over the loss of her calf is another reminder of the close psychological similarities between our two species. We can but wonder what levels of grief dolphins suffer in hell holes like Taiji Cove.