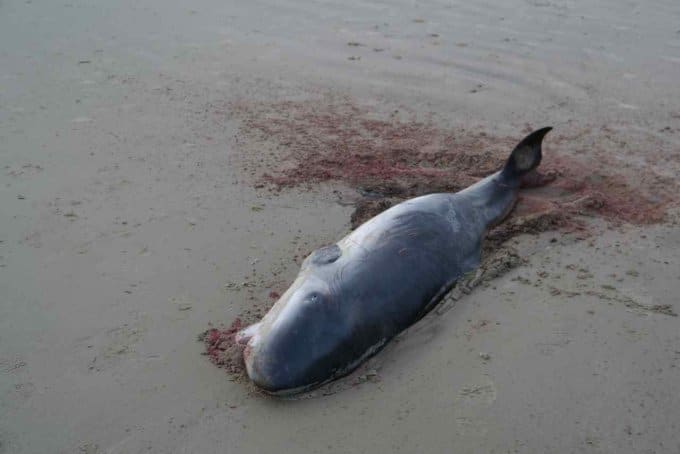 Last Friday I was called to attend a reported live dolphin stranding in Banff, on the North East coast of Scotland. Staff and volunteers at the WDC Scottish Dolphin Centre are trained as Marine Mammal Medics by the BDMLR so we can help with any whale and dolphin strandings reported in our area of the UK.

Having received a message from BDMLR of the stranding I headed off to the location and quickly discovered I was first on the scene, so the initial task was locating the dolphin. Sadly after a couple of minutes of searching in the wind and rain I discovered the body of the individual with no signs of life.

After a quick scan of the body to check for any obvious cause of injury I realised that this stranding was a little more unusual than any I had seen before. The creature I was looking at was definitely not a dolphin. I don’t mind admitting I was a little baffled; it actually looked like a miniature sperm whale crossed with a shark!

Oddly I was not far off! I managed to get some pictures back to the Centre with the help of two other equally confused Marine Mammal Medics who had now joined me on the beach. Thankfully at the Centre we have a knowledgeable team on all things whale and dolphin and Tessa, a WDC residential volunteer, quickly identified the individual as a rare pygmy sperm whale. They are barely seen at sea and usually in much warmer waters. Most of what is known about them is derived from stranded individuals, which is again very rare.

Although we have experience of strandings, each occasion leaves you feeling mixed emotions. On the one hand you see an individual suffering distress and pain, whilst on the flipside you can help return these amazing creatures to their natural environment. 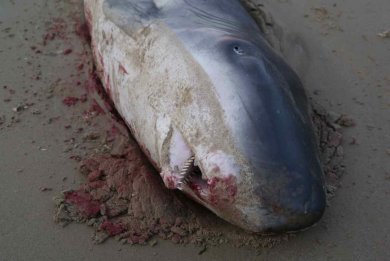 However, once a whale or dolphin has died it is vital to perform necropsies on such rarely seen creatures so we can learn more about them and to try to discover the reasons behind each stranding. It was now a race against time as the incoming tide began to lap around the pygmy sperm whale, threatening to take her back out to sea. We waded into the water with a tarpaulin to place underneath the whale to help move her. This is an effort in itself as despite being relatively small at 2 metres she weighed an extraordinary amount. We then had the epic task of dragging the whale 200 metres up the beach for Scottish Rural College (SRUC) to pick up for the necropsy.

That’s where I handed over to my colleague Kila Taylor, WDC Conservation Officer, who by chance had turned up at the SRUC offices to collect some baleen from a minke whale, only to find the pygmy sperm whale there. They kindly let her stay and watch the necropsy – what a unique and incredible opportunity!

Through attending the necropsy Kila discovered a few amazing things about this rare creature… As the name suggests pygmy sperm whales are a lot smaller than sperm whales with females only growing to around 3.8m compared to 12m, this particular individual was only 2.07m so is believed to be a juvenile.

They have some unusual defence mechanism; just behind the eye is a false gill and this feature (thought to be an adaptation to help them ‘mimic’ their main predators, sharks), along with the under slung jaw, often causes the pygmy sperm whale to be initially confused for a shark when sighted or stranded. 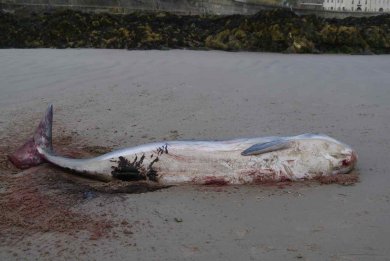 When startled they release a cloud of reddish-brown intestinal fluid, this may act as a decoy very similar to that of squid ink. So if the false gill doesn’t work to deter predators, they literally soil themselves to avoid danger!

These are remarkable creatures indeed and although dead strandings are always extremely sad, the more we know about them the better we can understand them. Hopefully when the results and tests from the necropsy come through in around a month we will discover why this rare individual stranded in Scottish waters so we can potential learn how to protect them in the future.

What to do if you see a stranding: