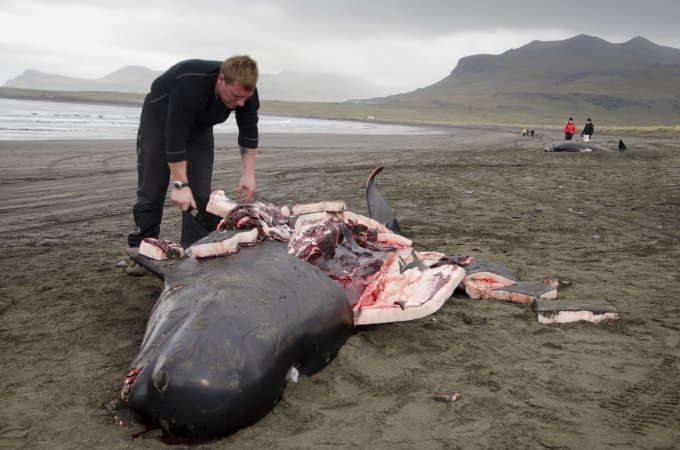 Around 40 pilot whales stranded recently near the town of Rif, on the western coast of Iceland, after reportedly being disorientated during bad weather. Up to 300 pilot whales may have been in the original pod that were seen close to shore and it appears that some then became trapped in a harbor.

Sadly, some of the whales trapped on the shoreline may have been still alive when local people rushed to the scene and killed some of them using potentially inhumane methods, such as small knives, without first waiting for the correct authorities to determine whether the whales could be helped and re-floated back into the water, or humanely put to sleep (euthanized).

Official stranding protocols require that the chief veterinary officer must determine whether to rescue or humanely euthanize stranded whales (using a rifle).  Under Icelandic policy, the commercial sale whale meat is only permitted when processed in approved ways and when normal slaughterhouse guidelines are met.  However, interested individuals can take meat for personal consumption.

This incident is in stark contrast to one in July 2012 near Keflavik, where divers, whale watching vessels and fishermen worked together to return over 100 pilot whales to safety after coming close to shore.

Pilot whale meat is known to be highly contaminated with heavy metals, such as mercury and other toxins, and these whales may have stranded due to disease (morbillivirus or brucella) which could also harm anyone who then eats the meat.

WDC is investigating further into this incident and it is understood that the Icelandic Food and Veterinary Authority is also currently looking into the response to this stranding event.  We hope to work with local authorities to prevent a similar ending for future stranding incidents and reinforce existing protocols that protect human and animal health and welfare.