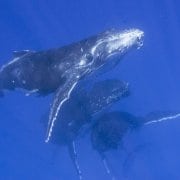 The recent humpback whale strandings on Ghanaian beaches has led a local environmental group to blame the oil industry, claiming that the whales only started turning up after oil production began in 2009. Friends of the Nation agree that whale deaths are not uncommon in Ghana but they are concerned about the frequency of these strandings over the last four years. Five humpback whales have individually stranded in the last week, taking the total number of humpback whales stranded since 2009 to 16.

There is however a question mark over whether the oil industry is indeed to blame, as to date, there have been no post-mortems conducted on the whales making it almost impossible to attribute cause of death. I say “almost” impossible as whales and dolphins who die as a result of fishing entanglement or vessel strike sometimes exhibit external tell-tale injuries. Without all the evidence, how do we know that the cause of death for these animals wasn’t actually something else?

Ghana’s coast forms part of the distribution range of a ‘Gulf of Guinea’ humpback whale breeding stock (with current estimates putting this population at over 10,000 individuals) and some researchers believe that it is possible that these strandings instead reflect a peak abundance of breeding humpbacks in these waters. It has also been suggested that an increase in the incidence of strandings in recent years may well be a result of other population dynamics and/or an increase in human coverage and reporting. 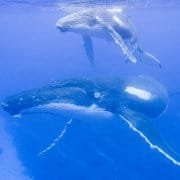 In Ghana, hundreds of by-caught whales and dolphins are routinely consumed annually, with the Clymene dolphin being the most commonly killed. As a result of fishermen experiencing low fish catches in recent years, it is believed that the capture of dolphins for consumption has been taken to a whole different level. Instead of being incidental there is now evidence that these are turning into directed catches. During a recent WDC funded Ghana dolphin bycatch monitoring project, one observation by researchers was that bycatches are increasingly developing into a directed fishery. Dolphins are now being caught and processed to various marketing centres in Ghana and it is gradually becoming a lucrative business. Mostly, when caught, small dolphins are used as bait for catching sharks and this practice too is on the ascendancy. Shark meat forms part of the normal diet of Ghanaians, and therefore fins are only part of the incentive.

By-catch is a significant and known conservation issue in Ghana as is the consumption of whale and dolphin meat, accounting for hundreds of animals each year. The export market of shark fin seems to have increased the pressure on dolphin captures and researchers agree, if some immediate conservation measures are not put in place and implemented it may lead to a significant decline in some dolphin populations in Ghana. 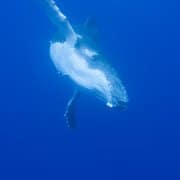 The implications of the oil industry (or rather the activities of the oil industry) on marine mammals the world over are a major cause for concern. Noise generated by seismic surveys causes disturbance and displacement of whales and dolphins and our lack of knowledge about the extent to which deaths are caused by intense noise pollution makes it difficult for us to manage such activities effectively.

WDC believes that post-mortems need to be carried out on stranded whales and that all evidence of cause of death investigated. Only then can the true reason for these unfortunate deaths be known. At the same time, urgent attention needs to be given to both incidental and targeted catch of dolphins in Ghanaian waters. It may well turn out to be the oil industry at fault but until more is known, no conclusions can be drawn. In the meantime, the Friends of the Nation group have called for a full enquiry into the humpback whale deaths and WDC strongly supports this call.