Usually when we get a call saying there’s a report of an animal in Plymouth Harbor, it’s not something that turns out to be unusual. From an ocean sunfish to a seal that is just resting on shore, we’ve gotten all sorts of reports. Most recently, on January 12th, we were told that a 12 foot pilot whale was swimming in circles and had been there for a few days. So out we went, looking for a tiny whale and a barely visible blow (smaller animals are more difficult to locate), when the calf was spotted. Instantaneously we determined it was not a pilot whale, and when the mother surfaced we realized we had a highly unusual sighting of a mom and calf North Atlantic right whale.

Calves are almost always born in the Southeast US, but this was a very young whale. We knew there was no way a whale that young could have made the migration up the entire east coast. It must have been born off our coast! Without great knowledge of typical behaviors for newborn calves, we weren’t sure what to expect. The pair was routine in their behavior, but it was not like anything we were used to so we were concerned. After obtaining authorization to get closer and investigate, we carefully documented them. All of our information was shared with the Provincetown Center for Coastal Studies (PCCS), who decided to do an aerial survey. This flight determined that the pair seemed fine, and also allowed the mother’s identity to be confirmed as a whale named Wart. 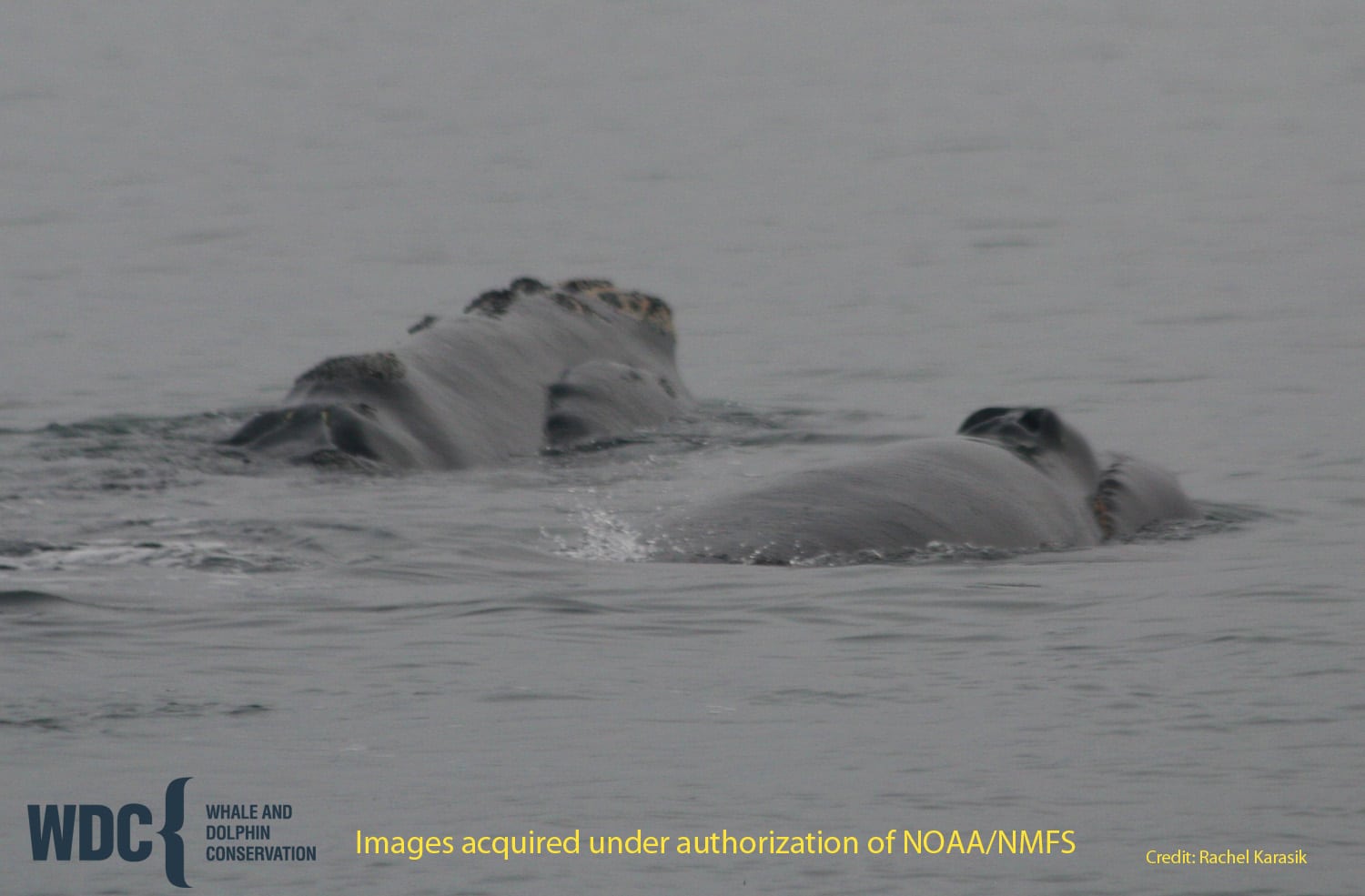 Wart was last seen in 2010 when she was disentangled from fishing gear she had been carrying for roughly two years. While she had previous calves, this was her first calf in 8 years, which is longer than the average interval and likely was a result of her entanglement. It was also estimated that the calf was no more than 2 weeks old. We knew this was a special sighting and wanted to keep an eye on Wart and calf to monitor their condition. During this first encounter we were also able to record some video, hopefully it helps to illustrate the size difference between Wart and her new calf.

Wart and calf from Whale and Dolphin Conservation on Vimeo.

Five days after the initial sighting, we received a report that someone had seen them not far from shore and a little farther south from our initial location. We decided to investigate from land, and were able to find Wart and her calf exactly where the report had led us! Additional data was collected and we called it a day after determining that the pair was still doing well.

The next three days consisted of outreach to our volunteers in the area to coordinate a “coastal watch” rotation, making use of all our available resources to keep an eye out for Wart and calf. A combination of staff and volunteer time lead to detailed surveying and an unfortunate lack of sightings. The next report came on January 21st when a friend working at the nuclear power plant in Plymouth reported the whales just yards off their property. We coordinated our efforts with PCCS and took our boat out to do some sampling work near the whales’ location. By the time we were headed out, they had moved north of the power plant but were still close to shore. In an attempt to be as non-invasive as possible, the boat headed back to shore after the sampling was completed. This map shows the location of the whales on each of the three days we saw them. 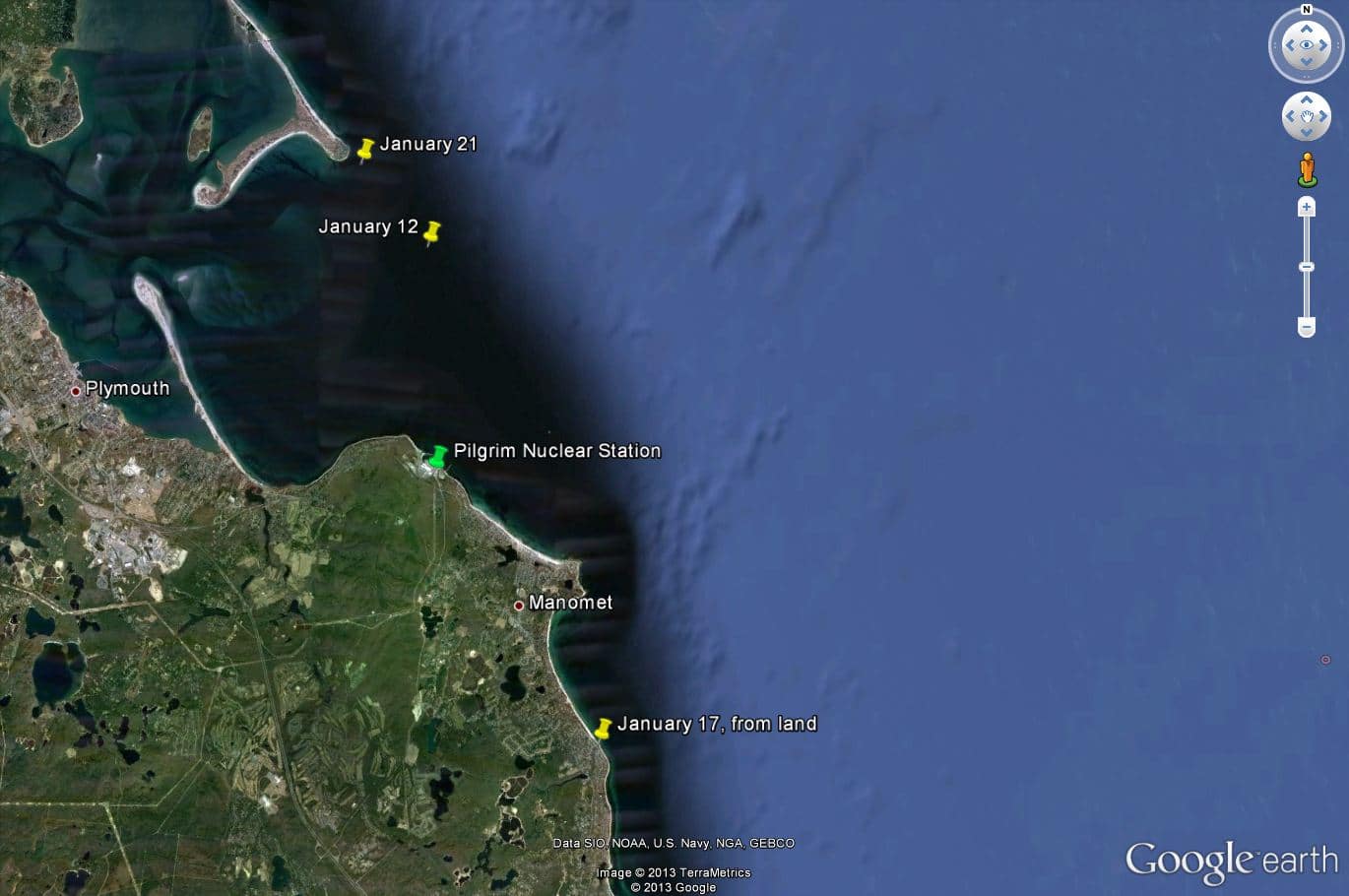 A series of bad weather rolled into the area, hindering our ability to track the whales further during the week. The most recent information we’ve received is that a scallop boat reported seeing a mother and calf right whale near Provincetown, the outermost town on Cape Cod, but this sighting has yet to be confirmed as Wart and her calf. Upon learning of this news, I had mixed feelings. For one thing, I felt relieved that I wouldn’t need to continue spending my limited free time during the weekends searching for the pair in below-freezing temperatures. At the same time though, I felt saddened to know that if this report was correct, our direct involvement with Wart and her calf would now essentially end since they would be such a distance away from us.

Each year we have such a limited window of opportunity to see right whales in Cape Cod Bay, and in recent years, this window has been earlier than normal. We continue to hope for the best for Wart and her calf and will be sure to share any additional information we obtain. This has certainly been an incredible experience and I have never been involved in something that was so tremendous and significant. For the first time in 27 years, a new right whale calf was documented in Cape Cod Bay in January, and I was fortunate enough to be a part of it.Help us ACT RIGHT NOW to protect Wart, her calf, and all right whales by signing our petition to increase and extend protective legislation.