Today’s Moby Dick chapter is Chapter 92: Ambergris – read by Michael Bracewell. Our Executive Director explains how WDC is working to make the harvesting of whales for products like ambergirs and spermaceti oil a thing of the past. 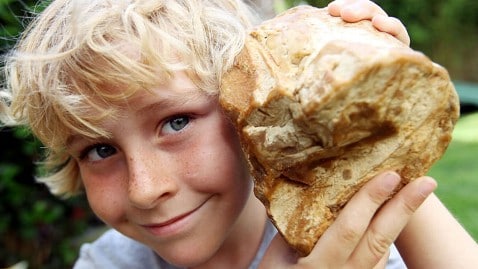 Ambergris is secreted in the intestines of the sperm whale and while it is usually passed in the fecal matter, it can sometimes be found in the abdomens of whales. Ambergris that forms a mass too large to be passed through the intestines is expelled via the mouth leading to the reputation of ambergris as obtained from whale vomit. It can be found floating upon the sea, or more often found on the seashore in lumps of various shapes and sizes, weighing from 15 g to 110 pounds or more.

When initially expelled by, or removed from the whale, the fatty precursor of ambergris is pale white in color (sometimes streaked with black), soft, with a strong fecal smell. Following months to years of photo-degradation and oxidation in the ocean, this gradually hardens, developing a dark gray or black color with a crusty and waxy texture, and has a peculiar odor.

Historically, ambergris was well known for its use in creating perfume and fragrance much like musk. However, today its use is illegal in many countries and synthetic alternatives are now increasingly being developed. In fact, sustainable alternatives are available for all of the products we used to harvest whale for. Another great example is spermaceti oil, which demand for is still a serious threat to whales. 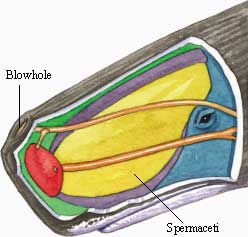 Spermaceti oil, an amber fluid produced by the tonne in the head cavity of a sperm whale (or isolated from whale oil by refining) is not technically oil at all, but mostly wax esters with a smaller fraction of triglycerides. It hardens on contact with air to provide a firm wax. Spermaceti was originally a source of candle wax and became a staple of the cosmetic industry in the early 20th century due to its similarity to human skin sebum. It also became a core ingredient in industrial lubricants (including in space exploration technology).

The sperm whale paid a heavy price for its utility to man. In just twenty-five years between 1951, when Japan joined the International Whaling Commission, until 1976, Japan and the Soviet Union killed over 220,000 sperm whales. In the 1980s, the cosmetics industry began using alternatives to spermaceti, most notably jojoba oil, also not technically an oil, but a liquid wax that is very similar in structure to spermaceti. Jojoba oil is pressed from the seeds of the desert shrub jojoba (Simmondsia chinensis). Today, over 5,000 tonnes of jojoba oil are used annually in personal care products.

WDC is concerned that, despite the use of jojoba and synthetic substitutes, unscrupulous or unwitting manufacturers of topical preparations may still be using spermaceti as an ingredient, whether sourced from ongoing hunts in Japan and Indonesia, stockpiles or extracted from whale oil. Using simple internet searches, WDC initial investigations identified more than 20 cosmetic or personal care products that claimed to contain spermaceti. Several are apparently available in the USA and European Union although their import would violate CITES.

WDC is now working with the International Jojoba Export Council 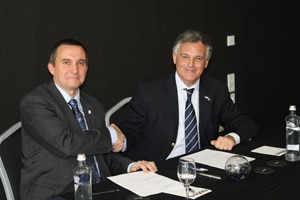 (IJEC) in highlighting the treat that Spermaceti poses to the protection of whales.

WDC joined with IJEC to successfully oppose a tariff on imports of jojoba esters into the EU, the hub of the cosmetics industry. The tariff would have made it more economic to start using spermaceti when sustainable alternatives are available.

We shall be continuing to investigate this area of growing threat and campaigning to shut down any loopholes that mean that whales could be threatened.