I willing to wager that a fare number of people working in the marine mammal field have not read or were able to finish reading Herman Melville’s Moby Dick. There’s a reason for that – it’s not the easiest of reads, even when you love the subject matter. I also think many of us regard the story is no longer relevant because for most of us whaling is a thing of the past. However, whaling still continues and one of the issues WDC works tirelessly to stop. And I would challenge you to take another look at Moby Dick – in a really fun and manageable way……..Moby Dick Big Read: an online version of Melville’s masterpiece. Each of its 135 chapters read out aloud, by a mixture of the celebrated and the unknown, and broadcasted daily in free downloads. WDC is honored that WDC as the charity of choice for the project.

In celebration of Moby Dick and this wonderful undertaking, we are delving into a few of the chapters and adding a modern day spin of where marine mammalogy is today. Shedding a little light on the biology and conservation that has taken place in the 161 years since Melville took us to sea. Today’s chapter is Chapter 53 “Brit” read by the star of the BBC TV’s Sherlock Holmes, Benedict Cumberbatch.

“Brit” is what the whalers used to refer 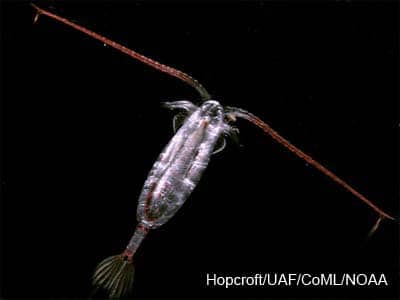 to tiny crustaceans, of the genus, Calanus. These tiny creatures are the primary food source for some of the largest creatures on the planet: the right whales. Herman Melville likens the right whales to lawn mowers, which is a poetically accurate description of how these animals feed through these patches of “brit”. Unlike other baleen whales, right whales are skimmers: they feed by moving with their mouth open through a patch of zooplankton, removing prey from the water using their baleen or as Melville puts it – their “Venetian blinds.

Because right whales require such large quantities of these tiny organisms, science now tells us they are not interested in feeding on individual copepods, krill, etc. Instead, they search out massive aggregations of copepods, which again through habitat studies we now know exist in both horizontal and vertical dimensions. The whalers referred to these patches as in the “yellow seas” – as described in this chapter of Moby Dick.

The North Atlantic right whale (Eubalaena glacialis) was also pushed to the brink of extinction by whaling. This population is currently hovering around 500 individuals. There is much work being done by scientists and managers to save the species and consequently we have learned a great deal about their natural history. For example, we know right whale distribution in the Gulf of Maine is largely controlled by zooplankton distribution.

Recently even more research has been done into the physical processes which cause these patches to form in large enough aggregations to support this vulnerable species. One of the current regulations that helps protect North Atlantic right whales is that all vessels must stay at least 500 yards away. This 500 yard distance serves to decrease the risk of vessel strikes, as well as works to maintain the integrity of the copepod patches and ensure successful foraging for the whales.