Marine mammal scientist, including WDC, jointly submitted comments to the National Marine Fisheries Service (NMFS) recommending the denial of Georgia Aquarium’s application for authorization to import 18 wild-caught beluga whales into the US for public display. Here is a summary of the submitted comments:
We object to the Georgia Aquarium’s permit application on the grounds that the proposed transport and confinement of wild beluga whales are inhumane and present an unnecessary risk to the health and welfare of these animals and are, thus, a violation of the Marine Mammal Protection Act. 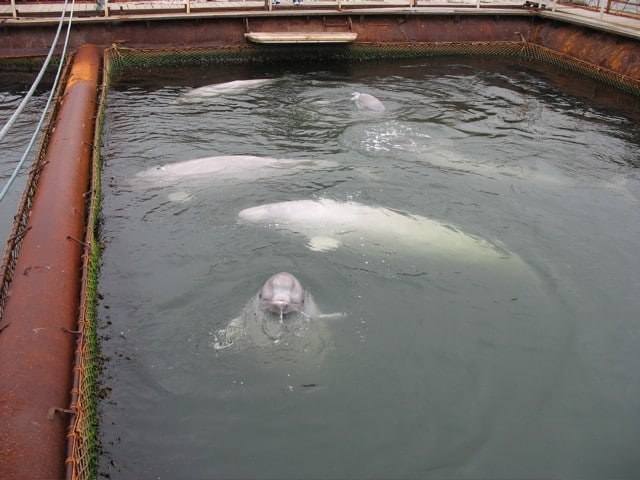 Handling and transport produces an increase in stress hormones whales and dolphins and chronic stress can lead to immunosuppression and susceptibility to disease. Furthermore, handling and transport increases mortality risk and beluga deaths during ground transport have occurred in the past.For these belugas, the transport plan includes a flight from Russia to Belgium where each beluga will be transfer to a new container and plane for further transport to the states. This additional step is unusual for a cetacean transport. We find the permit applicant’s claim that “switching carriers and aircraft is an added step, but it poses no additional risk” to the animals to be disingenuous. We believe that these whales will be subjected to exceptional levels of handling and transport stress, solely for unclear logistical, rather than veterinary or biological, reasons. If these belugas do survive the exceptionally rigorous transport, they are then subjected to captivity where in the best cases belugas experience life history trajectories that match but do not improve on those of free-ranging belugas. Given that the sources of mortality in the two environments must differ, it is highly plausible that the primary cause of mortality in captive belugas is related to stress, which would be long-term or chronic in a captive situation. Given the known deleterious effect of chronic stress on immune function, it is plausible to argue that captive belugas lead less healthy lives than their wild counterparts, both psychologically and physically, which would explain why, despite protection from natural hazards, they do not live longer in captivity.
No import of cetaceans deliberately captured for a US facility has occurred in 20 years. Therefore, we find the Georgia Aquarium’s action of sourcing belugas directly from the wild regressive. Given the prolonged transport being proposed, which will require mid-journey transfers to different containers and planes, we also find this proposal inhumane. Once again we urge the NMFS to deny this permit application.You can still submit your comments to NOAA