We have an amazing group of interns this year. In reality, I’m constantly amazed at our dumb luck in getting fabulously dedicated interns. I’m also always interested in what draws people into the marine mammal field, I mean besides the ridiculously cool whales. Anna Petracca has a great story of how she came to us, she was attending the University of Miami getting a degree in Psychology when 23 pilot whale stranding Cudjoe Key, FL. Anna was on her university’s Marine Mammal Stranding Team and was called to action. For the following two weeks, anytime she wasn’t in class Anna was worked in 8 hours shifts hold the pilot whales upright so they could breath while doing health assessments. This life-changing event now has Anna focused on getting experience to help injured and stranded marine mammals. And I think she’s going to be great at it, Anna and I responded to a seal stranding in July and I so I got to see her in action. She also was the first to document a very sick humpback, Tulip. So here’s Anna’s blog telling us about Tulip.

As the season progresses, everyone is so excited to see who is a new mother, who has had a second or third calf, and how nurturing the mother is. It is always heartwarming to see the pair swimming together and ‘meet’ each individual for the first time. Unfortunately, one mother and calf story this year has taken more of a desperate turn. There is a mother humpback whale by the name of Tulip whose first appearance this season was on June 17th. As soon as this whale surfaced we could tell something

was severely wrong with her; she was emaciated. It is normal for mother humpback whales to be underweight when they return to Stellwagen bank with their calves because their food supply is extremely limited in their Caribbean winter breeding grounds and mothers supply very rich milk to their calves every day for months. The calves drink between 50-100 gallons of milk everyday, but it’s not just the shear volume that takes a toll on mom, it’s also how rich and fatty the milk is. To put it in perspective, human milk is 2% fat, cow milk 4% fat, whale milk is 40% fat. So these energy demand leave new mothers on the skinny side, sometimes so skinny that you can see their shoulder blades. So here’s what a skin mother would normally look like an arrow 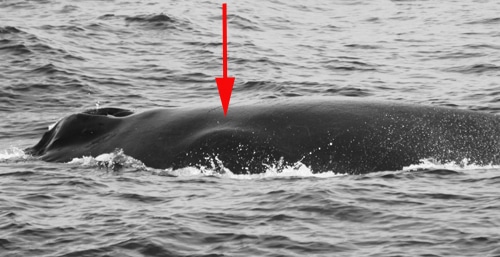 pointing to her shoulder blade.

In Tulip’s case, the calories burned from producing this milk each day are coming from her already severely depleted fat stores. Most mothers who return to our very productive feeding grounds eventually gain it back in the summer months as they consume literal a ton of food each day. Tulip, however, is a different story.We have never seen a live whale in Tulip’s state. She has become so thin that almost all of her bones are visible. When she brings her body out of the water she exposes her ribcage and shoulder bones. 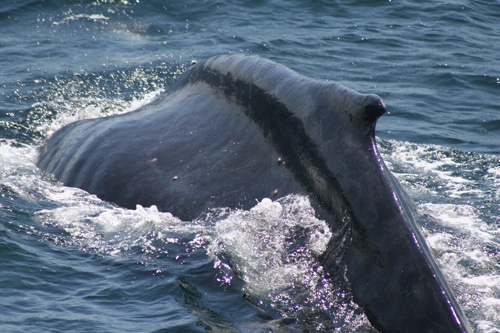 Her skull bone when she surfaces is so pronounced that it pools water in the divots. It is not clear

why this has happened. She does not appear to be entangled in any fishing gear, which is a common reason for any marine mammal to lose weight, as a result of not being able to hunt for food. There could, however, be some entanglement in her mouth itself or perhaps she could have swallowed non-food objects such as plastic bags. This has become an increasing cause of death among marine mammals. She could also have a health ailment. Unfortunately, at this time there are no clues to what is actually causing her condition.

After I first saw Tulip and her calf in mid-June, we saw them a few more times right up until June 24th. Then there was a month-long hiatus when we did not see them. This is common as whales are wild animals and have free range of the oceans, so they tend to wander looking for the best places to eat. In Tulip’s case, we were concerned that her ‘absence’ could have fatal implications. Perhaps she simply could not survive any longer given her lack of fat reserves. This could mean a death sentence, as well, to the calf who is completely dependent on Tulip’s rich milk at least until it has sufficiently learned how to catch it’s own food.

But then I was on the boat when we re-sighted Tulip and her calf on July 23rd – she is still emaciated and it is hard to tell simply by sight if she has gained any weight since we 1st saw her. For comparison here’s the difference between Tulip. 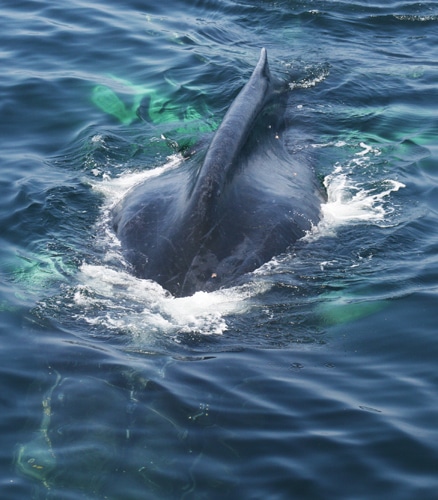 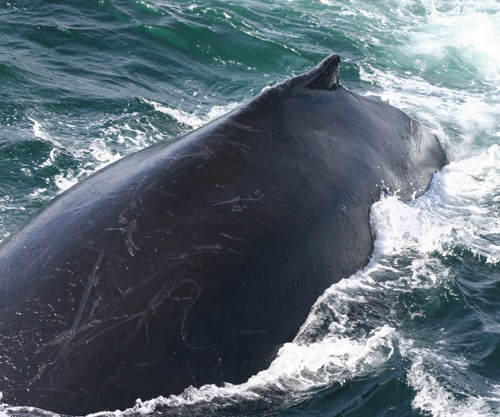 And what a healthy humpback should look like. Since an adult humpback whale can reach lengths of 40 to 50 feet, a whale needs to gain a substantial amount of weight to make a discernible difference in appearance. The calf in contrast looked healthy and was acting just as a calf should, playing at the surface as mom went on deeper dives. He or she was tail breaching countless

times, meaning it must have received a steady supply of milk from Tulip to provide all the energy those types of behaviors require.

Tulip’s story this year has been tearful as we watched, waited and hoped for her to regain her strength and continue to care for her new baby. Particularly because Tulip is a favorite, she was named for the tulip-like black mark on the 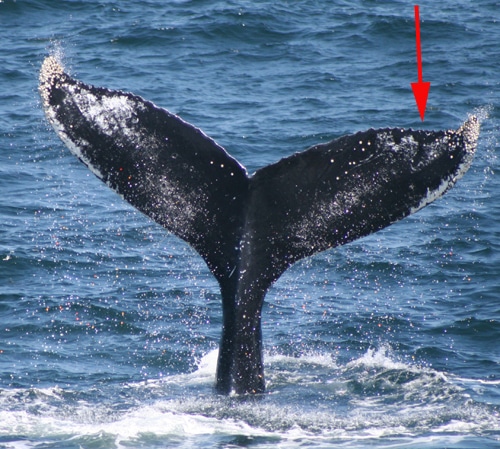 upper edge of her right fluke. We began seeing Tulip in 1988 and this year’s calf is the 7th that we have documented her with. However, her story has also been a heartwarming and uplifting tale of a loving and persistent mother who continues to care for her baby each day even as doing so may be putting her already frail body at risk. We hope we will continue to see Tulip this summer and that her health will drastically improve in order for her and her calf to have a hope for the future.