The extraordinary beauty and charisma of an all-white mature bull orca, cracking the wild and windy waters of the Russian Far East, is just the tip of the iceberg in terms of appreciating the extraordinary diversity of life here. The wonders abound: More volcanoes than anywhere on Earth; six different species of salmon; marine bird life in the tens to hundreds of thousands of pairs; multiple species of seals and sea lions and healthy numbers of walruses and sea otters; some 15 species of whales, dolphins and porpoises, and a local population of orcas that has so far revealed three white orcas, including a rare all-white mature male, at least 16 years old. We’ve called him “Iceberg”. 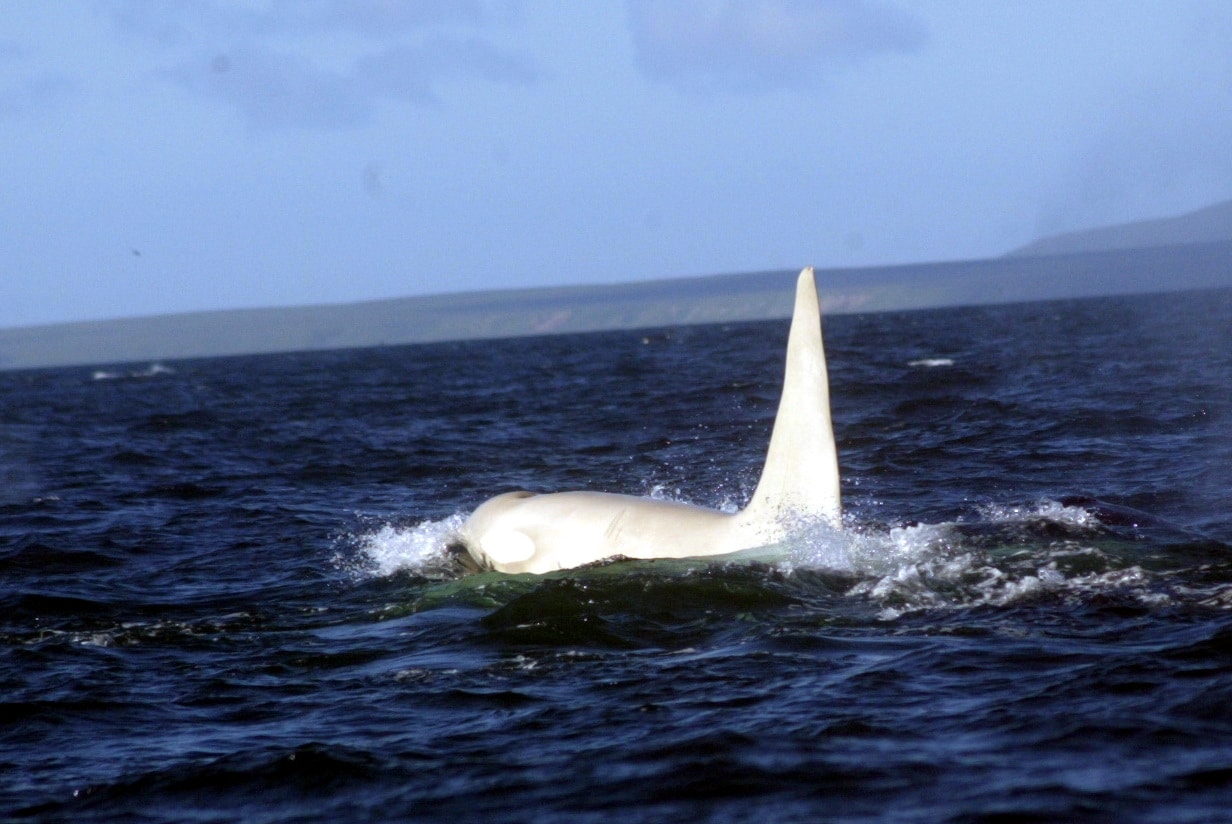 © E Lazareva/FEROP The explosion of life has allowed our small team of a dozen or so young Russian biologists to do a wide range of pioneer whale research in this area over the past decade — research sponsored by WDCS, the Whale and Dolphin Conservation Society and co-funded by Humane Society International, Animal Welfare Institute, Rufford Foundation, among other groups. The orca work, under the banner of the Far East Russia Orca Project(FEROP) was begun in 1999 to learn more about and try to protect orca populations being targeted for aquarium captures. With the exception of two female orcas taken from one of our known pods in 2003, we have been successful. In 2009, we added the Russian Cetacean Habitat Project, with some overlap in team members, to include studies of other whales in the region and to aid efforts toward identifying and zoning critical habitat in the Commander Islands State Biosphere Reserve, the largest marine reserve in Russia. With Alexander M. Burdin from Russia and Hal Sato from Japan, I started the project and have stayed as it’s co-director with Dr. Burdin. I would like to summarize a few of the team’s accomplishments: • We were the first researchers to photo-identify killer whales in Russian waters and today we have about 1500 individual orcas identified and catalogued, and counting. • We have explored the social nature of Russian orcas with more than 20 pods in 3 clans in our main study area in Avacha Gulf alone. There are two ecotypes: fish eaters that concentrate on mackerel and salmon, and marine mammal eating transients that feed on minke whales, dolphins, porpoises, seals and sea lions. 95% of these are the fish-eating resident-type orcas. • We have photo-IDed more than 850 humpback whales on their summer feeding grounds around the Commander and Karaginsky Islands, where some of the same whales return year after year, showing site-fidelity. We have made nearly 30 links to their winter breeding grounds in Japanese waters off Okinawa and the Ogasawara islands. • We have started the first photo-ID catalogue for the rarely studied Baird’s beaked whale and have had resightings from year to year. This species is hunted by Japanese whalers in Japan’s waters so our study may well prove to have future conservation value. • Meanwhile, a satellite project by some members of our team has gathered and studied the bones of the Steller’s sea cow which went extinct in 1768, to try to gain more clues into why it went extinct just 27 years after it was found and named by scientist George Wilhelm Steller. • We have recorded thousands of hours of underwater vocalizations, mainly of orcas. A key part of FEROP research focuses on the nature of the unique dialects of orcas. Moscow State University biologist Dr. Olga Filatova who gained her PhD through FEROP in 2005, is currently first author on an international paper published in March in Animal Behaviour on the evolution of the vocal repertoires, comparing the dialects of orca communities, or populations of the species, across the North Pacific. “Different kinds of sounds are used for different purposes,” says Filatova, “ranging from close-range communication to long-range calls that may function more to keep a pod together.” The acoustics part of our team around Filatova is now looking for scientific proof that the resident fish-eating orca pods, such as Iceberg’s pod, and the transient marine-mammal-eating orcas, are separate species. “The conclusions will have strong implications for the conservation of the species,” says Filatova. “if they can be shown to be two species, which some scientists think they probably are, then each one will require a separate conservation plan with potentially greater concern and benefits for both species.” With regard to Iceberg’s pod, we have no genetic data but we are hoping to meet them again in summer 2012 and learn more about the phenomenon of white whales, why they occur, what it means and whether Iceberg is a true albino — perhaps we can catch a glimpse of a pink eye — or “just” one of the most beautiful orcas anyone has ever seen. © Erich Hoyt 2012, WDCS Senior Research Fellow. Learn more about the Project and watch the field work of FEROP in 2 parts.